In Genesis Chapter 12 God called Abram and gave him a test.

In this Bible study we see how Abram passed the test and why he is called the father of all who've found faith in Christ.

1. God speaks to Abram in the first three verses of chapter twelve.  Review the three verses carefully.  What root word is repeated five times to indicate God's intentions in His speech?

2.  There's another word that's repeated seven times in the first three verses that further defines God's intentions.  Which word is it and why is it important?

4.  How has God blessed all the people on earth through Abram (verse 3)?  Read Acts 3:25 and Galatians 3:8 to develop your answer. 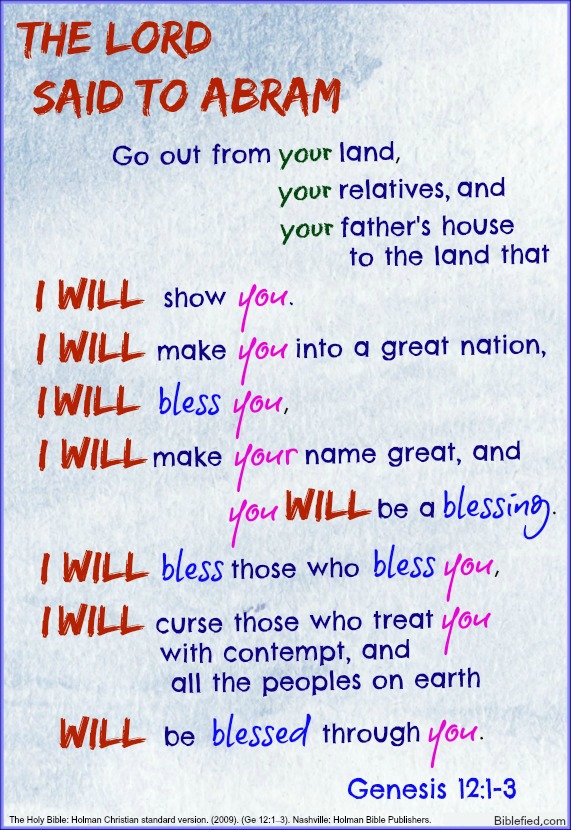 5.  Consider the promises of God to Abram in the first three verses.   What do they tell us about the power of God and what are the implications for us today?

6.  How many altars did Abram build and where did he build them?  Did Abram always do the same thing when he built an altar?

7.  Abram asked Sarai to say that she was his sister.  While this was deceitful, it was also true that she was his wife as well as his half sister (see Genesis 20:12).  Some would say that this is an example of a "white" lie.

In his book Growing in Christ, J.I. Packer reminds us that Jesus called Satan a liar and the "Father of Lies" (see John 8:44).  He observes that men lie to others in order to impress, move, or use someone.

Packer also notes that when we lie to avoid being seen in a bad light, it's simply our pride motivating our deceit.   He notes that men offer lies:

So was Abram wrong to ask Sarai to lie and was Sarai wrong to obey him?  The answer isn't as clear cut as we might want it to be.  In the book Moment with God: A Devotional on Every Biblical Book, it's noted that the Jewish midwives of Exodus lied to Pharaoh, that Rahab lied to conceal the Jewish spies, and that David lied to a priest as he was leaving Israel.  However, these lies were offered when lives were in danger.

What about Abram, if he perceived that his life were in danger, was he wrong to lie?

8.  Abram asked Sarai to "please say" she was his sister (verses 11-13).  So apparently, this was a request not an order.  What's more surprising to you, that Sarai was so beautiful at age 65 or that Sarai agreed to her husband's request?

10.  Why do we continue to take matters into our own hands regarding our circumstances like Abraham did in hiding his marriage from Pharaoh instead of relying on God?

Click "Start" to answer a question on Genesis Chapter 12

We pray this Bible study on Genesis Chapter 12 has blessed you.