In Genesis Chapter 17 God changes Abram’s name to Abraham and Sarai's name to Sarah.  He also introduces the Jewish rite of circumcision to signify compliance with His covenant.

3. Identify the ages of Abraham, Sarah, and Ishmael at the time God spoke to Abraham from your review of chapter 17.

4.  Review the text of Chapter 17.  How many times does God state to Abraham “I will” followed by a promise?  Cite the verses.  Include verses with multiple occurrences of the verb “will” but only one occurrence of the subject “I”.

5.  What are the blessings or promises of God to Abraham, Sarah, and Ishmael in chapter 17?

6.  In this chapter of Genesis, we see God giving names to Abraham, his wife Sarah, and his son Issac.  God had previously given Hagar the name of her son Ishmael (16:11).  Abraham accepted this and named his first son accordingly (16:15).  Ismael means "God hears".  Abraham means "Father of a multitude".  Sarah means "princess".  Isaac means "he laughs".

When God gave these names to them, can you imagine the reaction of the hundreds of servants (Genesis 14:14) in Abraham's household?  Here was a man who's almost 100 years old telling his servants that from now on they were to call him the Father of Multitudes!  And then he tells his servants to call his barren and aged wife Princess! 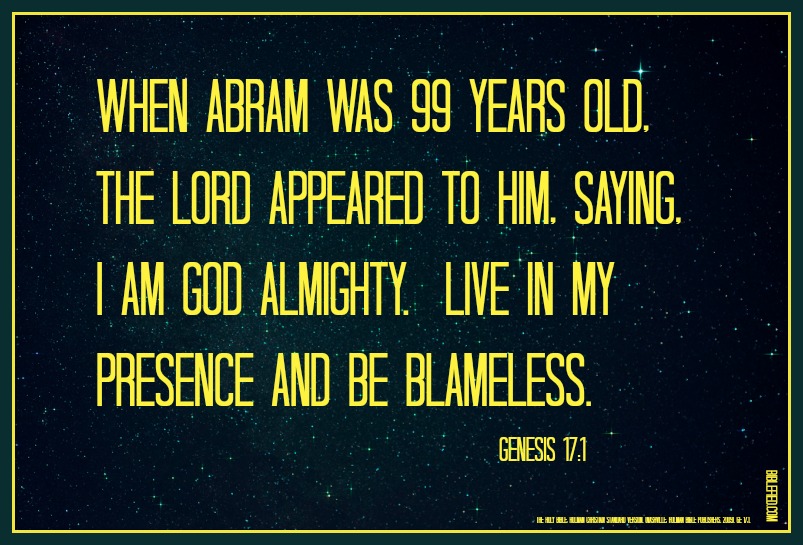 7. Read Romans chapter 4, verses 13 through 25.  How does this passage help us understand the relationship between Genesis 15:6 and chapter 17?

Also, how does it explain how Abraham is related to Christians today?

8.  When God had previously spoken to Abraham, He had promised him that He would:

But in chapter 16 we see that after about ten years of waiting for the promised offspring, Abraham gives in to his wife’s scheme to provide an heir.  He has a son by her slave Hagar.

Then it’s likely that Abraham thought for the previous 13 years before God speaks to him in chapter 17 that Ishmael would be his heir.  So after waiting without very specific details for twenty five years, God fulfilled His promise to Abram, but only on His terms.

What about you? Have you waited or been waiting for a long time for a blessing from God?  How long have you waited and how has it affected your relationship with God or your faith in Him?

10.  Answer the following questions regarding circumcision in this chapter.

We pray this Bible Study on Genesis Chapter 17 has been a blessing to you.