Review chapter 14 to develop the following tables to help better understand the information provided in the text.

1.  From verse one, who were the four kings who waged war?

King from What Town?

2.  Use the table below to draw on ﻿the map provided﻿ the route the kings took to battle the different people groups.

To assist you, here's a list of who was defeated by the invading kings from from verses 5 through 8.

where they were defeated

3. Draw on the map provided what the route was that Abram likely took when he chased and ambushed the invading kings to rescue his nephew Lot.

4.  Where was Lot living according to verse 12 and what does it tell you about him?

Lot has made some bad choices.  As we saw in the previous chapter, it was his attraction to the things he saw that enticed him to the Jordan Valley.  Then, after he left Abram (and some contend that he also left the Promised Land), he set up his tent near a city that was very evil in the sight of the Lord.  Then he moves from near the city to actually live in the city.

There’s no evidence that Abram’s neighbors were evil as well but Lot’s choice is peculiar.  It’s been noted by the commentator N.M. Sarna that Abram and his descendants were semi-nomads who avoided the Jordan Valley along with other regions.  Instead, they wandered between sites in the central mountain range and the Negev.

No one knows why Lot moved into Sodom but we do know from the Bible it wasn’t a good place to live.  The Bible tells us that Lot was distressed and tormented by his choice to live in Sodom (2 Peter 2:7-8).  By all accounts, Lot was a good man who made a bad decision to move there, and some would say, he made a worse decision to stay there.

5.  In the first sixteen verses of the chapter we learn of nine kings.   It says four kings attacked and defeated five kings.  Then in verses seventeen and eighteen, we learn of  a tenth king.  What’s different about this tenth king?

What’s different is how the tenth king is described.  The Bible says he’s a king like the others but that he’s also a priest to God Most High (verse 18).  This is the first time the idea of a priest is mentioned in the Bible.

Essentially, a priest is one who functions to mediate broken relationships between God and his people.  Later in the Old Testament the office of a priest was established to offer sacrifices for the sins of the people.  There was a whole tribe of Israelites designated as priests and one of them was ordained to the office of the High Priest who served as the greatest emissary to God on behalf of the people.

This continued until the new covenant which established Jesus Christ as the only High Priest.  Today, He alone is our High Priest who makes intercession for our sins before God.  By repentance and faith in Jesus Christ, and by His sacrifice on behalf of our sins,  Christians today have a High Priest before Almighty God.

Have you really repented of your sins?  Have you turned from being a slave to sin to the freedom of a life lived for God?  If not, Jesus Christ is your High Priest.  If you confess your sins, He can make peace between you and God.

The first words from King Melchizedek to Abram are “Abram is blessed” but the first words of the King of Sodom are “give me”.  The King of Salem gives Abram a blessing not just verbally but offers him bread and wine as well.

The King of Sodom wants to take what is not rightfully his.  As the loser of the war, he has no authority over the spoils or booty taken in victory.  Only Abram has that authority; and, as King Melchizedek points out, the real victor in this battle is God Most High.  Therefore, as it always does, everything belongs to Him.

The commentator A.P. Ross notes that:

“The point of the story in Genesis concerns this priest’s blessing prior to the king of Sodom’s offer, that was a challenge to Abram’s faith in the Lord to grant the promised blessings.  The encounter came at a high point, a vulnerable time; the king of Sodom offered Abram all the possessions if Abram would return the king of Sodom’s people to him.  Such an offer might be construed as a blessing from God, for God could bring wealth to Abram in such a way.”

Indeed, Abram had gotten wealth from the Pharaoh in an unusual manner.  Ross continues:

“Prior to this offer, however, there was the blessing of Melchizedek.  This king of righteousness, as his title indicates, brought out refreshment for Abram and pronounced a blessing on Abram and the one true God . . . Abrams here found a true spiritual brother, one who believed in the spirit God who created matter, the sovereign God who had given Abram victory,  the true God who had promised Abram the blessing.

The words of this marvelous priest surely inspired the patriarch in his anticipation of the promise of God.  Herein lies the strength for Abram’s discernment of the Sodomite’s offer: with a fresh reminder of the nature and promise of the Lord, the appeal from the pagan was shown to be nothing more than a confusing digression from the true faith.”

Often we’re challenged like Abram to recognize that God is the provider of our blessings and the reason for our successes.  May we always remember this as we enjoy the abundant life that God has promised us. 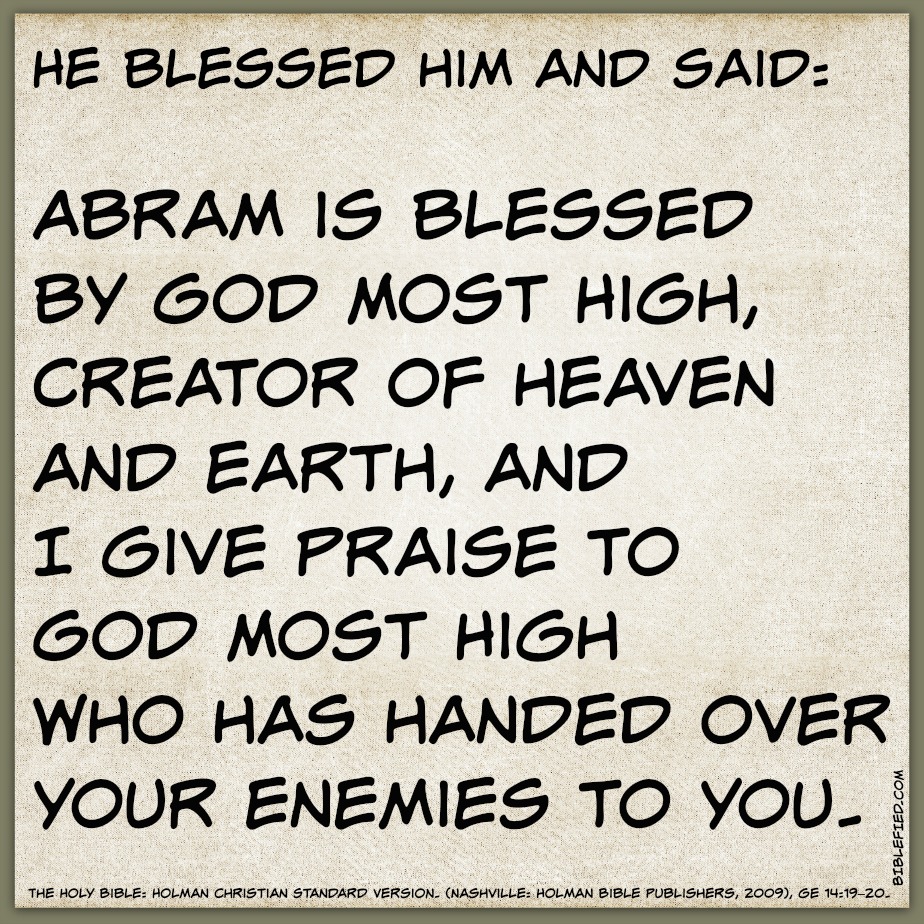 However, this tenth king offers different perspective.  What’s the reason he provides for Abram’s victory and in what verse did you find the answer?

Melchizedeck declares that he praises God Most High who he says handed over Abram’s enemies to him in verse 20.

8.  Abram faced a situation many of us in life face today.  When we achieve a measure of success in an endeavor we’re often recognized with a pay raise, a promotion, a trophy, a certificate, a new title, greater responsibilities, or held up as an example for others to emulate.

When this happens we can be tempted to be prideful and give ourselves credit for our achievements and reward ourselves with things like a new car, a new pair of shoes, a splurge on the town, or perhaps a fancy dinner celebration.

While there’s certainly nothing wrong with the celebration of an achievement, we can make a mistake if we improperly attribute the reason for our achievements without regard for the sovereignty of God.

Identify one thing can you do to give God credit whenever you achieve something in your life.

Then Abram publicly declares that his blessings are from the Most High God, and that he will not allow the king of Sodom to claim otherwise.  He refuses to keep anything belonging to the Sodomites so that they cannot claim that their possessions made Abram rich.

Abram wanted all to know that his blessings and riches came only from the Most High God.  What about you?  Do you acknowledge God with your possessions and money?  Everybody can do so; even if you have no money you can donate your time and talents to your church in service to God.

In what ways do you, or can you, acknowledge God with your time, your talents, your possessions, and your money?

We pray these Genesis Chapter 14 Answers have been a blessing to you.